Corned beef and brisket are both popular types of meat that are often served during special occasions.

They are both made from beef, but is corned beef the same as brisket? Well, the official answer is no and they both are not the same thing.

However, in this blog post, you can take a closer look at the differences between corned beef and brisket.

Plus, you can also learn how to cook them and some of the best ways to enjoy them.

So, if you are wondering what the difference is between corned beef and brisket, keep reading.

What Is Corned Beef And Where Does It Come From?

The term “corned beef” refers to a beef product that has been preserved through the process of pickling in brine.

The word “corned” actually comes from the old English word for “grain,” which was used to describe the large salt crystals that were used to preserve the meat.

This method of preservation was very common in the days before refrigeration, as it helped to keep the meat from spoiling.

Corned beef is usually made from brisket, which is a cut of beef that comes from the breast area of the cow.

The beef is first soaked in water and then rubbed with a mixture of salt, spices, and sometimes sugar. This mixture helps to flavor the meat and also helps to keep it tender. 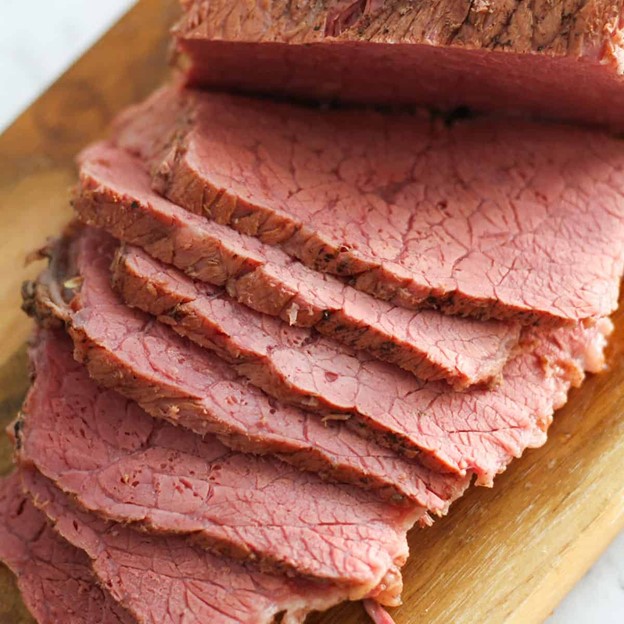 After the beef has been seasoned, it is then placed in a large pot or container and covered with brine.

The beef is typically left to soak in the brine for 10-14 days, which allows the flavors to really penetrate the meat.

After the curing process is complete, the corned beef is then cooked in water until it is tender. It is typically served with cabbage and potatoes, and sometimes carrots as well.

The leftovers can also be used to make sandwiches or used in other recipes. However, corned beef has a long history, and its origins can actually be traced back to the days of the Roman Empire.

It is believed that the Romans were the first to cure beef in salt, and that this method of preservation then spread to other parts of Europe.

Corned beef became especially popular in Ireland during the 18th century, where it was often served as a traditional Irish meal on St. Patrick’s Day.

Today, corned beef is enjoyed all over the world and is a popular ingredient in many different dishes. It can be found in grocery stores, delis, and even online.

What Is Brisket And Where Does It Come From?

Brisket is a cut of beef that comes from the breast or lower chest area of the cow.

It’s a relatively tough cut of meat, so it’s often cooked slowly over low heat to tenderize it.

Brisket is common in many cuisines, including Jewish, Irish, and Texas barbecue.

The most common way to cook brisket is to smoke it, which is why it’s often associated with barbecue. 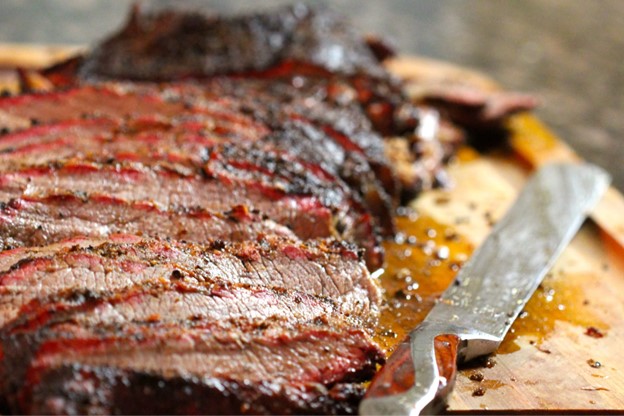 Smoking tenderizes the meat and flavors it with the wood smoke. Brisket can also be braised, stewed, or roasted.

When buying brisket, look for a cut that has a layer of fat on one side. This fat will help keep the meat moist during cooking.

Brisket is usually sold as a whole cut or in halves. The halves are easier to deal with, but the whole brisket will give you more meat.

Then, you’ll rub the brisket with a spice rub and let it sit overnight in the refrigerator.

When you’re ready to cook, preheat your smoker to 250 degrees Fahrenheit. Place the brisket in the smoker fat-side up and smoke for about 12 hours.

The internal temperature of the meat should be about 190 degrees when it’s done.

Remove the brisket from the smoker and wrap it tightly in foil. Let it rest for at least 30 minutes before slicing.

This will give the juices time to redistribute throughout the meat, making it more tender and flavorful.

Brisket is a delicious and versatile cut of meat that can be used in a variety of dishes. Whether you’re smoking it, braising it, or roasting it, brisket is sure to please everyone at the table.

Corned Beef Recipe: How to Make It? 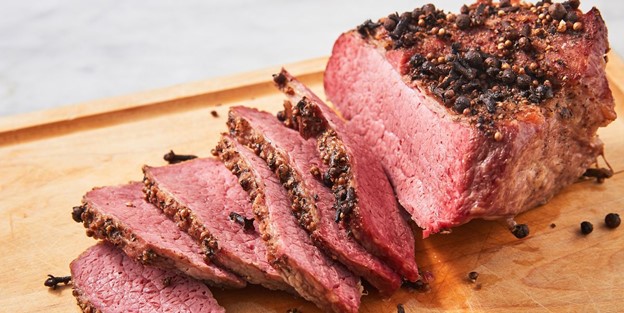 Brisket Recipe: How to Make It? 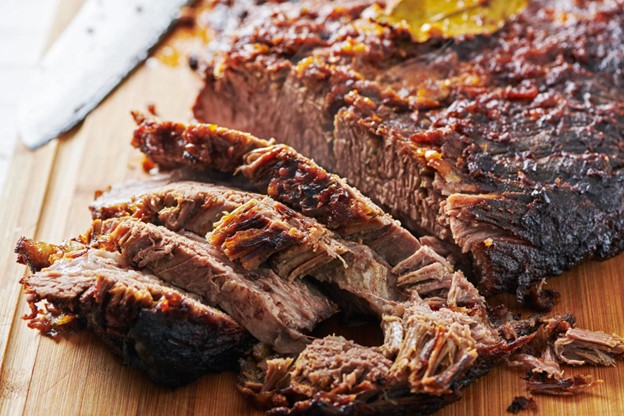 What Is The Difference Between Corned Beef And Brisket?

Corned beef and brisket are two types of meat that are often used interchangeably. However, there are some key differences between the two that you should be aware of.

Corned beef is typically made from a cut of beef called the “point.” This cut is taken from the shoulder area of the cow and is known for being tough and fatty.

In order to make corned beef, the point is pickled in a brine solution (water, salt, and spices) for several days or weeks. This process tenderizes the meat and gives it a distinctive flavor. 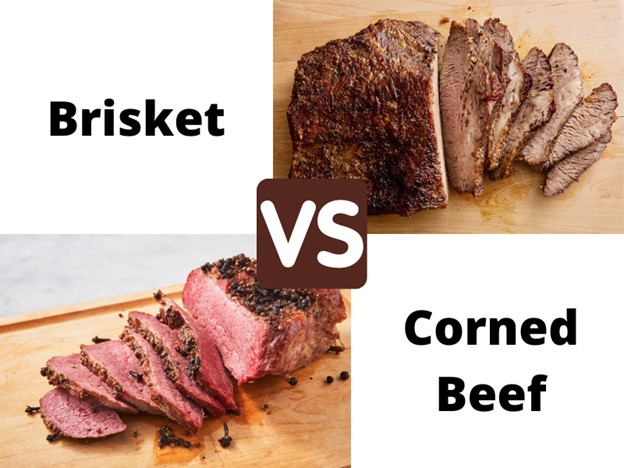 Brisket, on the other hand, is a cut of meat that comes from the breast area of the cow. This cut is also tough and fatty, but it has a different flavor than corned beef.

Because brisket is not pickled, it does not have the same salty flavor as corned beef. Brisket is typically smoked or roasted, which gives it a rich, savory flavor.

So, what is the difference between corned beef and brisket?

Both meats are tough and fatty, but they have different flavors. If you’re looking for a meat with a salty, pickled flavor, go for corned beef.

If you’re looking for a rich, savory flavor, go for brisket.

Is Corned Beef The Same As Brisket?

Corned beef and brisket are both made from the same cut of meat, but there are some key differences that set them apart.

Corned beef is typically salt-cured and then cooked, while brisket is simply smoked or grilled. This results in a different flavor and texture for each dish.

Corned beef is often served as a traditional Irish dish, while brisket is more commonly associated with barbecue.

Both meats can be enjoyed in a variety of ways, so it ultimately comes down to personal preference.

If you’re looking for a tender and juicy piece of meat, then go for brisket. But if you want something with a little more flavor, then corned beef is the way to go.

Corned Beef & Brisket: Which One is Better?

When it comes to corned beef and brisket, there are two schools of thought.

Some say that corned beef is the way to go, while others believe that brisket is superior. So, which one is actually better?

There are a few things to consider when making this decision. First, let’s take a look at the taste. 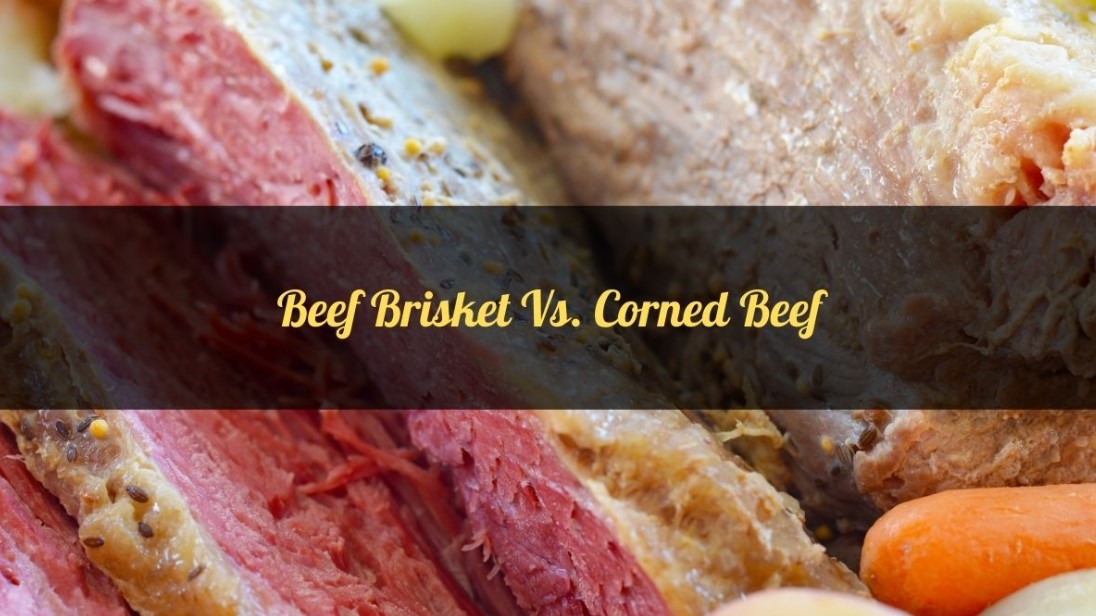 Both corned beef and brisket have a unique flavor that some people love and others find a bit too strong. However, overall, most people prefer the taste of corned beef.

When it comes to texture, brisket is usually tougher than corned beef. This is because brisket is a tougher cut of meat.

However, if you cook it properly, brisket can be just as tender as corned beef.

Finally, it’s important to think about price when deciding between corned beef and brisket. Corned beef is generally less expensive than brisket.

However, keep in mind that brisket usually requires longer cooking times, so it may not be the best choice if you’re short on time.

So, which one is better? Ultimately, it comes down to personal preference. If you like the taste of corned beef, then go for it.

If you prefer the texture of brisket, then that’s what you should choose. And if you’re on a budget, then corned beef is the better option.

So, is corned beef the same as brisket? The answer is no. Brisket and corned beef are both made from beef, but they come from different parts of the cow.

Corned beef is usually made from the front shoulder or breast of the cow, while brisket comes from the lower chest area.

Both meats can be smoked or cooked in a slow cooker, but they will have different textures and flavors depending on how they are prepared.

Ultimately, it’s up to you to decide which meat you prefer.

But now that you know the difference between corned beef and brisket, you can make an informed decision next time you’re at the grocery store.